Earning an MBA brings several advantages, not the least of which is enhanced earning potential. For decades, MBA graduates around the world have successfully converted the skillsets and networks they developed as a part of their business school experience into higher starting salaries. New findings from GMAC’s 2018 Corporate Recruiters Survey show that this year’s MBA graduates will continue to command a salary premium relative to direct from industry hires and bachelor’s degree hires.

The survey found that companies in the United States, for example, will offer a median base starting salary of US$105,000 to recent MBA graduates in 2018, compared with US$85,000 for direct-from-industry new hires and US$65,000 for bachelor’s degree new hires. This data is reflected in the graphic below 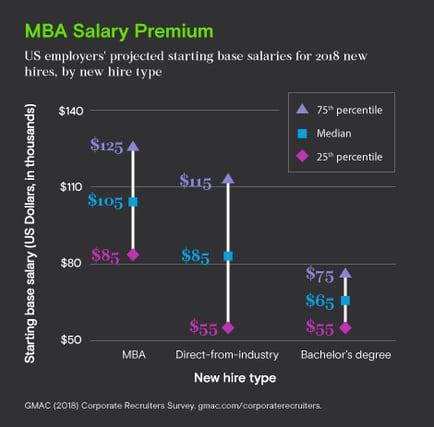