The decision to the invest time, energy, and money needed to complete a graduate-level business degree is likely among the most significant investments many alumni will make in their lives. Knowing all that they know now—considering everything they put into earning their degree and everything they got out of it—would they make the same decision again?

This is among the questions GMAC Research asked as a part of the 2018 Alumni Perspectives Survey, which collected responses from business school alumni in the fourth quarter of 2017. The survey results will be shared in a series of three short reports, the first of which will be published on gmac.com in mid-January. This month’s Chart of the Month gives you a preview of the survey results. 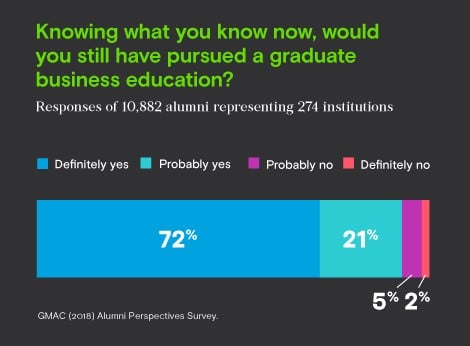 Overall, among the 10,882 alumni respondents representing MBA and business master’s programs at 274 institutions, the vast majority (93%) say that they would still make the same decision to earn their graduate business degree. Just shy of 3 in 4 (72%) say ‘definitely yes’, and an additional 21 percent say ‘probably yes’.

The first of the series of three reports based on the results of the 2018 Alumni Perspectives Survey, The Value of a Graduate Management Education, will be published later this month. Stay tuned to GMAC Advisor for all the latest from GMAC Research.